Rob’s Romford/Hyside Racing machine was in a class of its own as the Essex man repeated his double victory at Snetterton Racetrack in June with another two-race success that leaves him leading the Ducati Championship by a commanding 42 points.

The success for Rob was even sweeter knowing that 12 months ago almost to the day his racing career looked to be over after a horrendous crash at Brands left him with two broken hands and a fractured ankle.

After Sunday’s second race, Rob was in high spirits. “That was the perfect weekend,” he told reporters. “Obviously, after going home in an ambulance last year and going through what I went through…I didn’t think I was going to race again.

“To come back and do this, it’s been a dream weekend really. It’s my home track, all my family is here, even my mum has come today. It was great to get a win in front of her. The race was perfect, I didn’t put a wheel wrong and pulled away and won. Fantastic”

Rob started both races in pole position and crossed the chequered flag with a 2-second advantage in Race One and a massive 6 second lead in Race Two. He was the only rider to go under 1:30s, with the fastest lap set on Lap 5 of 1:29.823.

On Sunday, Rob had already built up over a 1 second lead on his first lap, before going to post the fastest lap of the race on his 2nd lap with a time of 1:29.829, once again the only rider to go into the 29s.

By half race distance, the Premier man had built up a 6-second lead, going onto to take the win with that same advantage, building on his points advantage at the top of the championship table.

Premier MD Neil Johns was trackside on Sunday and was full of awe for Rob’s performance. “It was a faultless performance by Rob. Sport doesn’t get much better than that when man and machine perform in total sycronicity,” said Neil, who is pictured below with Rob and his winning trophy. 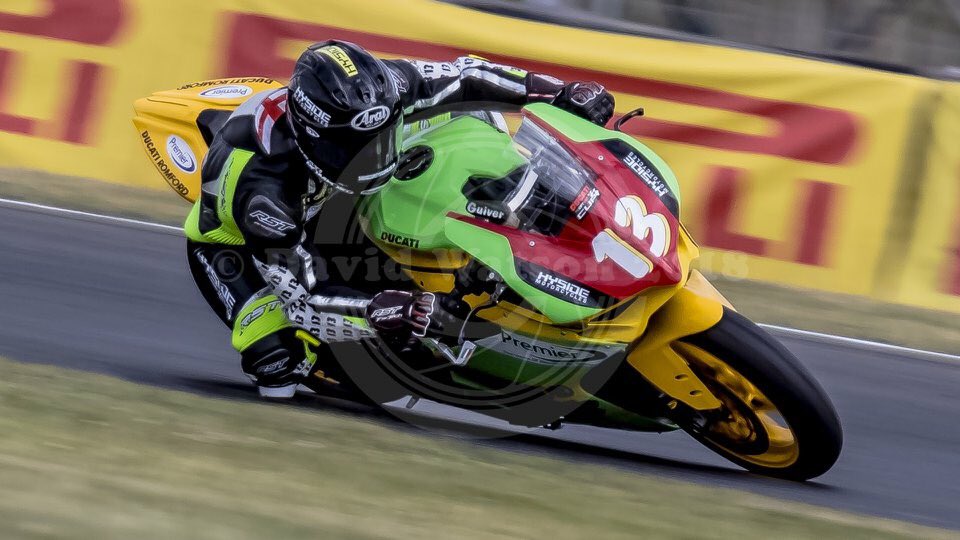