Everyone at Premier SSL is a fan of sport so it is with great delight and pride that we announce our sponsorship deal with Elise Lazarus, the young rising star of England squash.

In January, Elise became the first British player for four years to reach the final of The British Junior Open, the world’s most prestigious tournament attracting the very best juniors from around the world. And yesterday, the 16-year-old from Woodford Green lifted the English Junior Championship U-17 title at Edgbaston in Birmingham storming through the event without dropping a single game.

We have tracked Elise’s career from the very beginning and we are delighted to help support her coaching and tournament commitments which can be a huge for a young player. 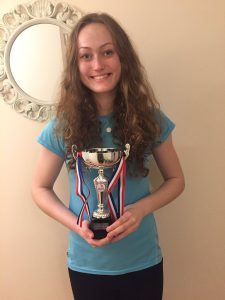 Elise, who plays at the Connaught Club in Chingford is currently juggling her promising squash career with her school timetable, with two hours of court time each day. Elise had been coached by her dad since she first picked up a squash racket as a nine-year-old,but for the past year she has been working with top coach Ben Ford, who she said has developed her game after introducing a strength and conditioning programme into her training.

We’ll keep you updated on Elise’s progress this season and wish her all the best for what looks like being a monumental 2017.